When Lucy and I first got a glimpse of Katy Alston’s work, we were astounded. She illustrated medieval Ludlow in all its glory as a map, drawing on historical resources. It’s pretty awesome stuff. In this Q&A, we asked Katy, an artist and illustrator by profession and a self-confessed amateur historian, what motivated her to create a work of this depth and scale and just how she did it. 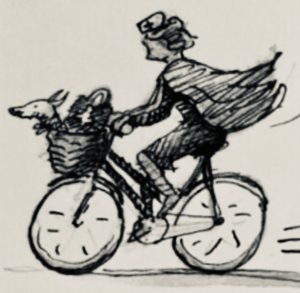 What is your background, and what inspired you to design a medieval map of Ludlow?

I am an artist and illustrator who has developed a fascination for history and, particularly, historical buildings due to spending a lot of time drawing them. Sometimes I just want to see if it’s possible to make something such as a medieval map of Ludlow to see how much information I could glean. I graduated with a degree in Fine Art painting in Farnham, Surrey. I graduated in ’88 and continued to paint for about 10 years but then shifted to illustration when I had my children. It was easier to work on a smaller scale. I have worked as an illustrator in Shropshire for around 20 years, much of the work as maps. Ludlow is such a historically inspirational town and beautiful too; I have made several maps of it now, including the one in the town guide. Last summer, I had to do some endpapers showing medieval Shrewsbury for a novel (I’m not sure if it’s out yet, so I won’t say who it’s by). I really enjoyed playing the history detective. I had already started thinking about a medieval map of Ludlow, so that encouraged me too.

Although many of my maps are made as commissions, I make maps for my own pleasure and then sell them, which means I can have free rein to include exactly what I want!

The detail is incredible, down to the animals. Was historical accuracy important, and how much research was involved?

I tried to ensure that everything on the map had been researched. For example, I wanted to add boats on the river but didn’t because Ludlow didn’t have a decent boat trade route. It was blocked intermittently and very unreliable. Artists have added trows ( boats) in the past, but this was apparently just artistic licence. I tried to find records for every building I included; some whole streets, such as Harp lane, were documented. Creating some roads was like doing a jigsaw, knowing what is there because it still is in situ and then piecing the other buildings together. I used many resources drawn from many places.

What were some of your primary sources of historical research?

I read or delved into many books. For example, all of David Lloyd’s books; Ludlow 1085-1660 by Faraday and Ludlow Castle by R. Shoesmith and A. Johnson. A few titles on medieval England including: The English Medieval House by M. Wood; Vernacular buildings of Shropshire by M Moran and Daily life in Medieval Times by Gies and Gies just to name a few. I also looked at the Ludlow Civic Society website, British History online, visited the Shropshire archives and walked the town, making little drawings as I went. During the second lockdown, which was a bit quieter for me, I investigated the precise date when Katherine of Aragon and Prince Arthur were at the castle before he became ill and died and the costumes of the period.

Tell us a fantastic or unusual historical fact you discovered about the town?

It is supposed that the entrance to the castle moved! It’s such a sizeable solid building you don’t really think that they might say, “oh, do you know, I think we’ll just move things around and go out this way instead!” It was thought to exit towards the old Christcroft, south out of the castle. I was amazed that the lane we use to get to the Rugby club, a bit of a scruffy little lane, was, in fact, ‘Green Linney’ and has been there for centuries! Katherine of Aragon was the way they spelt Catherine at the time; both spellings have been used, but I decided to stick to the contemporary spelling of that time. There are lots of these fun little snippets. Another example is the building that houses the IT suite in Ludlow College called Barnaby House dates from 1300. A little man was drawn into the map to represent the pilgrims who used the house when travelling to St Winifred’s Well in Wales. I found many tidbits like this during the research, but I could only include so much without it looking like a mad jumble!

Given your expertise, are you struck by how much of historical Ludlow is retained?

I would question my ‘expertise’ – I am just curious! But yes, it’s one of the best-preserved medieval walled towns in the country, apparently! I just love that you’re walking in the footsteps of so many ancestors. There’s history all around to explore if you’re interested. When I went on a ‘wall walk’ to see exactly where it went, I was blown away by how much is still there. I don’t think people realise. But things have a habit of just staying put, don’t they? We had a wooden gate just leaning on a wall near our house, which was there when we moved in (27 years ago) and when we saw photos of the front of the house taken in the 1930s, the same gate was there, leaning against the wall! It was moved by the farmer last year.

What do you think are the reasons behind this?

I think the layout has been preserved for a few reasons, such as the town’s topography. There’s not much room before you slip into the river or down the sheer drop north of the castle. A grid layout is an efficient way of organising your space which worked for the Georgians. It wasn’t going anywhere when it made it as far as the 20TH CENTURY planning restrictions!

Equally, Ludlow is changing as it inevitably will do. What do you see are the main areas of change?

Hopefully, Ludlow will change towards being a more inclusive town. It has been a town of two halves, the ‘haves’ and ‘have nots’, which has been detrimental. It needs to be a town that serves the whole community. I hope there will be positive impacts from reducing carbon emissions and creating a sustainable transport system. But, really, Ludlow is not a place for the car. People are amazed that it’s possible to drive through King St. at all, let alone at any time of day! We need to create a vibrant community with individual shops to draw people here for the Ludlow experience. It’s been great to see the emergence of the parlour pubs and the markets, particularly the makers’ markets. However, we need to ensure that valuable shops remain on the streets, not just tourist shops.

Do you have any plans to publish a detailed written explanation of the areas on the map? It would be a fantastic resource for the town, especially schools, and we would love to read it!

I always intend to write about all my maps. Still, I tend to get interested in creating another just as I end a project! So I also make these maps hoping that people will be interested enough to find out more for themselves. Also, as a self-employed artist needing to earn a living, I tend to move on to the next project!

What are you working on now?
I have just completed a map of Whitchurch High St showing the current shops and businesses and those from the past, with a bit of comment and humour. I am starting to gather information for a map of a small area of Hereford centred on the cathedral. I am also working on commissions and considering making a return to teaching workshops, which I stopped at the beginning of Covid. I enjoy the historical aspects of illustration. I will do more of it and perhaps finish my children’s book.

Discover more about Katy Alston’s art and illustrations on Facebook.

You can purchase Katy’s Medieval map at the Castle bookshop Ludlow and Ludlow Castle Gift Shop.