Everything you need to know about festivals in Ludlow in 2023 is right here in one digest. From April through to September, our town will host events celebrating live musical acts, craft beers, local food producers and culture. So, from those in the know, our organisers share what they think makes their event unique.

What the organiser’s say:

As ever, an excellent series of recitals, all seemingly stand-alone and yet inexorably linked by the deft hand of artistic director Iain Burnside’s fantastic curation. Some familiar names, some familiar pieces and, of course, some new faces for you and some composers, whom you may not know as well. Two main discussion events on Saturday and Sunday will help pull together the wider perspective and explore our relationship with and emotional response to English Song a little deeper.

“Ludlow English Song Weekend 2023 once again brings international standard performances to Ludlow from 14-16 April.  English Song is a genre rooted in English prose and many of the works of AE Housman (‘A Shropshire Lad’) have been transposed and used by composers in the songs and texts performed.  As Housman’s ashes lie in the churchyard at St Laurence’s, the town provides a perfect backdrop for this annual festival.”

A showcase of over 60 creative producers from Ludlow and the Welsh Marches. An array of producers, from cheesemongers and bakers to cake and sausage makers. You will also find winemakers, chocolatiers, delicatessens, and creators of delicious ice cream – among the many tasty products to be found over the weekend. Each year you can see new and exciting businesses joining the Festival, as well as being able to shop with some of your favourite, familiar products.

“We’re particularly excited about this year’s Spring Festival 2023 in its new venue at Ludlow Rugby Club. We’ll be able to welcome even more local food and drinks producers, as well as an incredible line-up of local breweries and live music. In addition, the Marches Transport Festival is joining us again so visitors can enjoy the best of the region’s food and drink whilst feasting their eyes on some stunning motors.”

The FIRST Ludlow Piano Festival – four full days of piano concerts and events at three venues in Ludlow’s beautiful and historic town in Shropshire. The event is the brainchild of Joint Artistic Director and Chair, Alistair McGowan. With Ludlow’s  perfect venues and excellent pianos all within 100 metres of each other, the organisers hope people will come from near and far to see and hear as many of the three-events-a-day for as many days as possible.

I hope that the Festival will attract piano enthusiasts from around the country with a rare chance to see some of our best pianists at some special venues in our lovely town within a very short time as well as piano enthusiasts that the concerts will appeal to people who have never heard (let alone seen) piano music and who will be as inspired by these pianists and the music that they play (as I have been) to go to this beautiful instrument and to make music on it themselves.

We hope this will be the first of many! The concerts are already selling well, so we hope people will book early to avoid disappointment! It should be a very special few days. I can’t wait!”

Celebrating 10 years, Ludlow Fringe is an independent Arts, Community and Culture festival which provides an annual inclusive, vibrant and diverse arts festival within and around Ludlow during the summer months. This year, the organisers have managed to secure a fantastic line-up, including the remarkable Dame Judi Dench and West Midlands’ most celebrated comedian, Jasper Carrott (both events sold out, no surprises there!).

“Ludlow Fringe 2023 is the most star-studded yet. We already have sold-out events with Jasper Carrott and Dame Judi Dench!

Our wonderful patron has invited more industry friends like John Inverdale, David Davies, and Nick Owen, who will be part of interview-style shows and comedian Ian Stone performing at Ludlow Brewery.

“Rex Factor is coming this year, a highly acclaimed history podcast which will be well worth seeing – the hosts are incredibly knowledgeable and have a very special comical charm.

Paul Borros will give a talk at The Methodist church about his book Humorology. Paul is an internationally renowned keynote speaker and psychologist who has coached the likes of Richard Branson!

“A midsummer ceilidh will take place at Ludlow Brewery as well as lots of theatre in Oscars, including a one-man play by TV’s Tim Wallers about his experience as a committee member fighting against a solar farm on the outskirts of Ludlow.

The best way to hear about all the events is by joining the mailing list, and if you want early access to tickets and 10% off, then you should consider joining our Friends Scheme.

Now in its 19th year, the Magnalonga is based on a similar and very successful event organised by our winemaking friends in Ludlow’s twin town of San Pietro in Cariano, near Verona in Italy – the home of Valpolicella. It is organised and run by the Ludlow Marches Food & Drink Festival Team and during your journey, you will enjoy part of a meal based mainly on the local produce of Ludlow and across the Welsh Marches. You can wash down your food with local real ale, traditional local perry or cider, or drink with a local connection.  Tickets go on sale in mid-June.

“The Magnalonga food walk is always such a joyous day to run – we’re looking forward to bringing you a real taste of Ludlow as you adventure through the south Shropshire countryside. Like all our events, its success comes from teamwork and a wonderful group of volunteers and local businesses who make it all possible. Keep your eyes peeled for more details later this summer.”

Over 100 exhibitors, predominantly from Ludlow and across the Welsh Marches. Without these fantastic exhibitors and vendors, the Festival wouldn’t happen. The event showcases creative producers across Ludlow and the Welsh Marches alongside a handful of invited traders who feature in our Slow Food section.

“Ludlow Food Festival is back for 2023, bringing a taste of the Marches region to Ludlow Castle with range of high-quality food and drinks producers. There’ll be an exciting line-up of live demos, talks and the hugely popular Fire Kitchen Stage, as well as trails, workshops and tastings. There will be events running throughout the weekend; including the chance to experience the castle by night on Friday with live DJs and street food, an incredible fire feast on the Saturday night and trails around Ludlow town. Sign up to the Ludlow Food Festival newsletter for all the updates on ticket release dates for these events later this summer.” 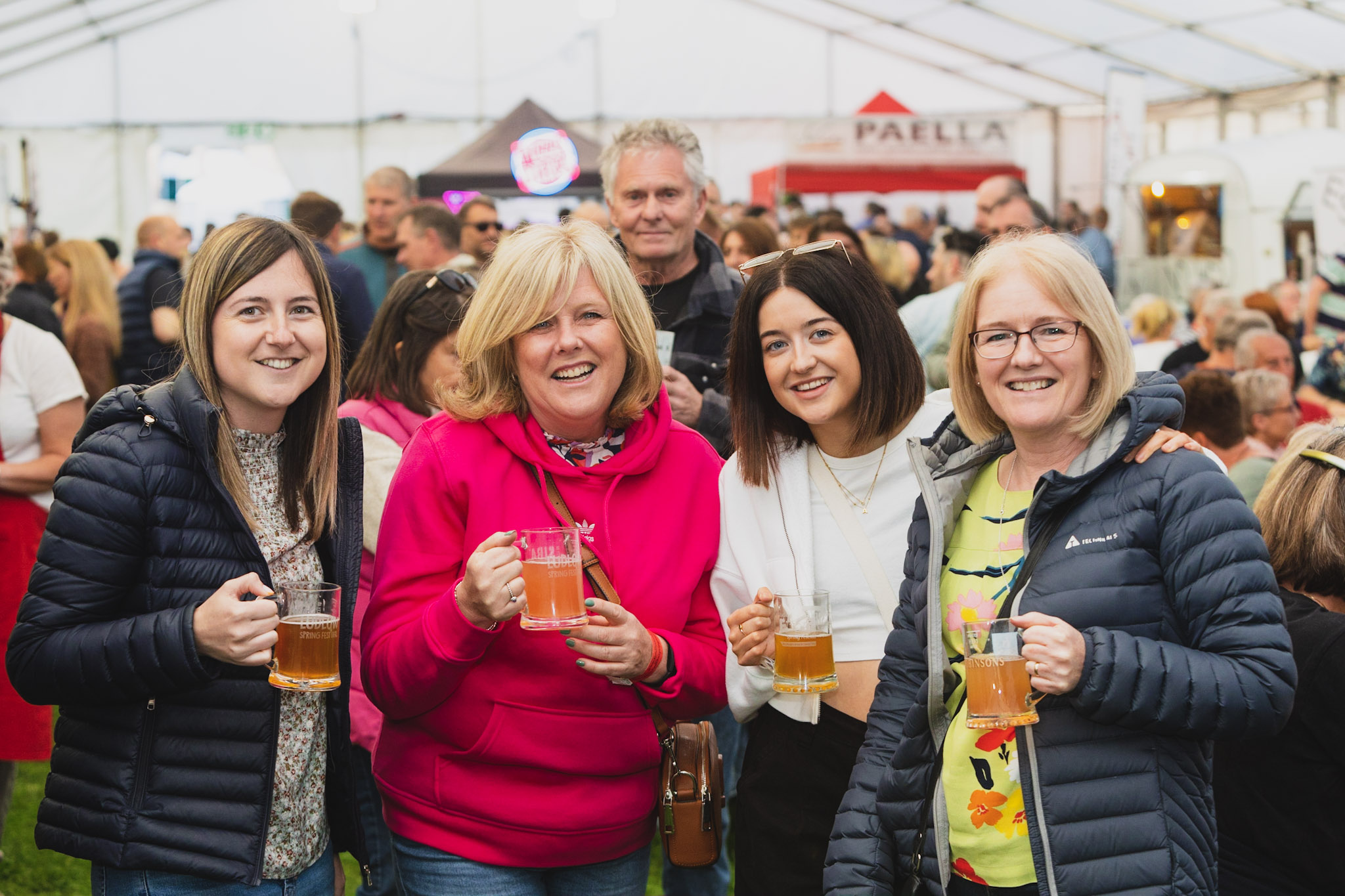