The Rag’ n’ Bone Man is coming to Ludlow Castle on Thursday, 20th July. Award-winning British songwriter Rory Graham better known as Rag’n’Bone Man is the latest name set to perform Within The Walls of Ludlow Castle this Summer along with Kaiser Chiefs and Bastille.

The internationally renowned star began his rise to fame in 2016 with the release of his debut single ‘Human’, which showcased a characteristic blend of traditional blues and hip hop and introduced fans worldwide to his powerfully deep baritone voice. 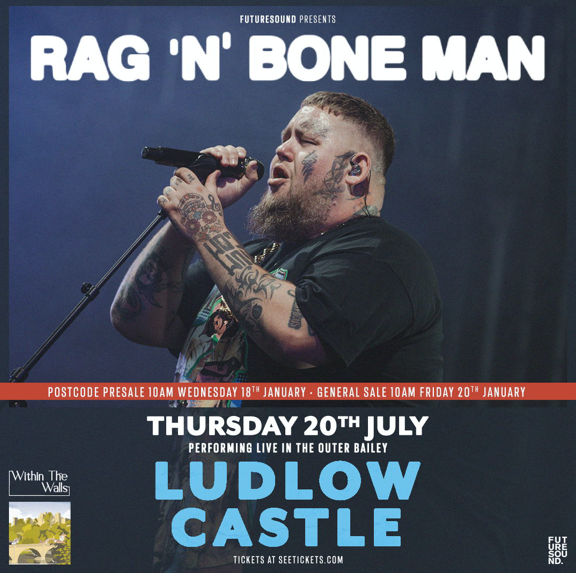 In 2017, Rag’n’Bone Man cemented his success with fans and critics alike following the record-breaking release of his 4x platinum #1 debut album of the same name ‘Human’ which became the decade’s fastest-selling debut album by a British male artist, landing a plethora of international accolades, and a third BRIT Award for ‘Best Single of the Year, with the title track in 2018.

Following the release of ‘Human’ Rag’n’Bone Man has continued to grow and sell out tours around the globe, collaborating with international artists including Gorillaz, Calvin Harris and most recently with Pink, who joined him on the stunning single ‘Anywhere Away From Here’ from his latest album ‘Life By Misadventure’. ​ Released in May 2021, the album rocketed straight to the top of the UK Album charts, earning him a second UK Number 1 Album and spending 7 weeks in the Top 10.

Rag’n’Bone Man’ is one of the country’s most successful artists, and the promise of seeing him perform singles such as ‘All You Ever Wanted’, ‘Alone’ and ‘Crossfire’, full of energy and new purpose, coupled with huge, long-standing classics like ‘Human’ and ‘Skin’ in the stunning grounds of the castle, promises to be an unmissable and truly unforgettable night to remember.

Set in the stunning medieval grandeur of Ludlow Castle, located in a beautiful town steeped in history, Ludlow Castle is the perfect location to catch what will be a unique and awe-inspiring event. ​ Today marks the third announcement of a series of shows to take place within the castle walls in Summer of 2023.

Residents of Ludlow and surrounding areas with postcodes SY7, SY8 & HR6 will have access to an exclusive 48-hour priority pre-sale from 10 am Wednesday, 18th January here.

General admission tickets go on sale at 10 am Friday 20th January via seetickets.com