Gardening with Kristian: the art of creating vibrancy

First, let’s begin with the definitions of create and vibrancy.

Create is defined as “to cause to come into being, as something unique that would not naturally evolve or that is not made by ordinary processes…to evolve from one’s own thoughts or imagination, as a work of art or invention.”

Vibrancy on the other hand, according to the Oxford dictionary, is ‘the state of being full of energy and life’ ‘striking brightness of colour; strength and resonance of sound”. Granted the latter is referring to the vibrancy of voice that fills the room! But who is to say that plants don’t have a vibrancy of sound? I think of a windy day when trees can be heard like crashing waves on rocks or hearing the breeze through grasses in a rhythm of meditation.

Now let’s take on board those meanings and translate it into the garden. I hold the view that whatever is created is done from the imagination, naturally that may be your own or someone else’s.

When it comes to our own imagination, sometimes we might feel it doesn’t quite hit the mark. But I put that down to skill and confidence which comes through practice. We might copy another person’s idea only because we haven’t tuned into our creative self.

The elements that bring a garden or border together can be in the form of innate objects such as sculptures, walls, trellis and garden furniture; as well as living elements such as tree, shrubs and perennials. With technology today, one doesn’t even have to have living plants to create a garden with vibrancy, I remember several years ago a garden featuring at Chelsea with artificial flowers!

If we think of the garden as a series of layers which provide dimension and interest our plant layers need to be considered. Trees in general are the tallest layer, that offer height, movement, sound and shape. Some interesting trees to consider are: Acer griseum, Betula ermanii, Cryptomeria japonica, Eucryphia nymansensis ‘Nymansay’, Ginkgo biloba and Nothofagus antarctica.

The next layer we would introduce into our garden scheme are shrubs. With shrubs I feel it’s more about texture and shape and often I find dense thick evergreen shrubs filling garden spaces and growing into dominant masses or blocks. To keep your garden borders open and airy avoid using plants such as: Aucuba japonica, Berberis varieties, Eleagnus varieties and Photinia ‘Red Robin’.

Instead other great choices include: Choisya ternata; Ceanothus and their many varieties; Pipthantus nepaulensis, Carpenteria californica ‘Bodnant’; Calycanthus ‘Aphrodite‘ known as Allspice. It would be remiss of me not to include Crinodendron hookerianum; Clerodendron trichotomum or Fatsia japonica!

Now we move to the lower layers of the garden, which come in the form of perennials, ground cover plants and bulbs. Throughout this layer we would aim to use plants which provide colourful interest either through its flowers or foliage. The perennials are what I class as herbaceous, biennials, annuals and bulbs. These plants and can produce woody or soft growth during the season. You can use perennials to create ribbons or blocks of colour through your borders.

Coverage of the ground is important if you want to reduce your time spent weeding! The ideal partner plants are those which are good at covering the ground, some great examples include evergreens such as Geranium macrorrhizum, Bergenia varieties, Euphorbia robbiae, Heuchera varieties and even short grasses such as Ophiopogon planiscapus ‘Nigrescens’. as this is a method that is used for low maintenance and weed prevention.

In a nutshell, creating vibrancy within you garden comes from the imagination and experimenting with a variety of plants which will provide you with layers that offer movement, sound, texture, colour and interest throughout the year. 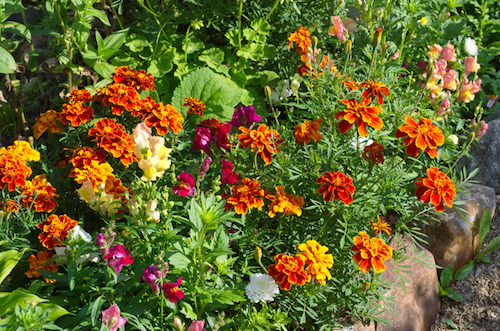