We face south-west towards Wales like a sturdy little ship that sails steadfastly into the prevailing weather. To our north is Church Street, and to the south Harp Lane.

Harp Lane is still cobbled, but no longer runs with human and animal mire, which for years it certainly would have done. It is still a pokey and dropsical place, an alleyway more than a lane. On weekend nights it is where couples kiss in the darkness and smoke suspicious substances. It is not the loveliest place after dusk, but on a sunny day it is the epitome of utopian Olde England. Lives have undoubtedly been created and finished down Harp Lane, and all the stuff in-between has happened there too. If those cobbles could talk…

The bilges of this ship are ancient, and in our cellar are two long-since blocked tunnels; one leading to the church 150 yards to the east; and another to the castle, a simila
r distance to the west. Of
course we don’t actually know that these are or ever were tunnels, but we’d romantically like to believe that this is the case.

There are half-doorways down there that were once at street level centuries ago. In places, the walls of the cellar are certifiably medieval up to waist height.  There’s an old range too, rusty now, but once this range would have provided warmth and food for those who have gone long before us.

Our front door is immediately opposite the gates of Ludlow Castle. Shortly after the Norman Conquest the castle was built here on the sharp end of a flat ridge, high over the river Teme.  After the castle came, there were people, houses and shops; a town was born.

Initially Harp Lane, Church Street and the High Street would have been populated by market stalls, but after a while things needed to b
ecome more permanent, so shops
were built. Hence our medieval cellar. It is highly likely that independent shops have been trading on this spot for a good 750 years, and when we’re here on our own and the customers have gone, this tangible sense of history beneath our feet can occasionally be overwhelming.

Our building — the bit that you can see — has been here since the early 18th Century. Ludlow was late to the party in terms of architecture, and no. 4 Church Street was one of the earliest buildings in Ludlow to be made from bricks. Up until then wattle, daub, and timber had been the materials of choice.

We don’t know much about the history of this place, but there have been very many before us, and we are merely passing custodians. Recently (relatively speaking) the Larcombes were here for three or four generations. From the mid-1800s to about 1960 the Larcombes lived in this building and sold cycles, perambulators and toys.

In 1901 the eight-year-old Albert Larcombe lived in here, and his sister Ivy died in that same year aged only six months.  Albert survived the trenches of the Great War and came back to run the shop where he was born. Like dozens of buildings in Ludlow, ours has its ghosts. We think that little Ivy Larcombe may have been back to visit us a few times; but this is a tale for another time. 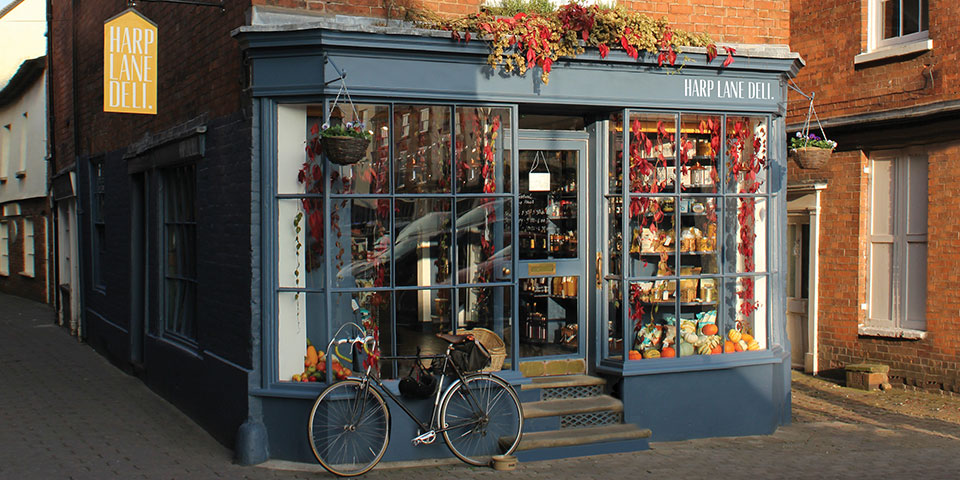