Joy of cycling in Shropshire

A love of cycling drew Kay and Chris Dartnell, owners of Wheely Wonderful, to the Teme Valley area over 26 years ago and they haven’t looked back since.

Back then, they knew they wanted to create a cycle touring company because they had participated in so many of them in Europe and the UK. They were living in the south of London at the time and the next step was finding the perfect spot to set up a base. They devised a list for the ideal location, which according to Kay was simple: easy access from London, quieter roads and, of course, fantastic scenery.

Their search concluded when they came to Ludlow and Teme Valley which ticked all the categories and more. Since opening their doors, Wheely Wonderful, which is based halfway between Ludlow and Wigmore in Elton, has gone from strength to strength. Kay and her husband have supported literally thousands on holidays across Shropshire, Herefordshire and Wales.

Get on yer bike

Ah Spring! As soon as the air begins to warm we have romantic thoughts of getting on a bike. Dedicated riders would have kept going throughout the winter but the average individual would have stuck their bikes in the shed very close to BBQ grill with the idea that when one comes out hopefully so will the other.

Ludlow and its surrounding area is perfect for cycling no matter your level, proved by the holidaymakers who come to cycle regularly using Wheely Wonderful tours. Avid riders doing the 800-mile trek from Lands End to John O’Groats during the summer come through the Marches.

So what keeps the crowds coming back?  The bliss of little traffic is key according to Kay. Visitors enjoy the opportunity for a more leisurely ride and part of the attraction are lanes and roads that are light of or traffic free. “Families are usually worried about [traffic] especially if you come from the South East in a built up area,” she affirms.

Visitors, whether from the UK or international, are reassured when they find that apart from the lovely scenery, they can go quite a distance without worrying about vehicles on the road. In fact, mentions Kay, the reaction from customers is of pleasant surprise that local drivers are often “so polite”.

A cycling holiday is not in the same category as an end-to-end race. Sure people want to go a distance but they also want to take in the scenery, stop for tea and a bite to eat, head to a pub and then find restful accommodation.

All of which is part of Wheely Wonderful’s appeal. Kay and Chris settled on their location precisely because it afforded a wide range of places to see, eat, sleep and things to do for everyone within cycling distance.

Her role is to organise bespoke and package tours that show off this variety. Particularly, the scenic routes that a tourist wouldn’t necessarily discover unless they were on a bike.

They have gathered all of their knowledge and share it through their own regional cycle maps that cover Shropshire, North Herefordshire and the border of Wales and includes itineraries.

Ludlow is hilly and keen mountain cyclists take advantage of its downhill courses in the Mortimer Forest. However, the undulating hills mean you have a more interesting terrain to cover. Particularly, as you change from one river valley to the next.

Thankfully, once you’ve climbed a hill, the fantastic views may very well be a balm for the muscles. Another advantage to enjoy are the tiny hidden villages and hamlets, and the pleasure of a tea shop, which you may encounter on a journey or you can purposefully plot stops on a route.

Even if you’re not a history buff, there are churches and castle ruins to investigate given the history of the Marches. The slower pace, then is the beauty of a bike. Kay says, “Someone described it to me once that it is a bit like a treasure hunt because when you’re on a bike you can slow down, you take more notice of everything and you’re surrounded by it the entire time.”

When Kay and her family have spare time, they are naturally on their bikes. A favourite ride no matter the weather, is a route from their base over to their local pub, the Sun Inn, in Leintwardine. Or, she heads to Croft Castle to enjoy the views from the Iron Age Fort.

Another ride that is at the top of their most-scenic-route list is the ride between their home and Clun, which they cite as the deciding factor to build their business in the area.  Beginning in Elton, it runs along the Teme and Redlake valley, and is a gradual, easy climb through a cleft in the hills.  Pubs, teashops and castles are situated conveniently on this run. Plus, visitors are tickled by the singular names of hamlets such as Leinthall Starkes and New Invention.  The ride crests the top of the Clun hills followed by a two-mile descent concluding at Clun village.

Other simple pleasures for Kay are close to home in Ludlow, where she often lunches at Ciccetti and The Green Cafe.

It’s clear that Kay loves what she does and there is no sense that she’s ready to put away her saddle or pedals. She declares that even after 26 years the best thing about running her business is getting outside and meeting people. Kay and Wheely Wonderful then are here for the endurance. 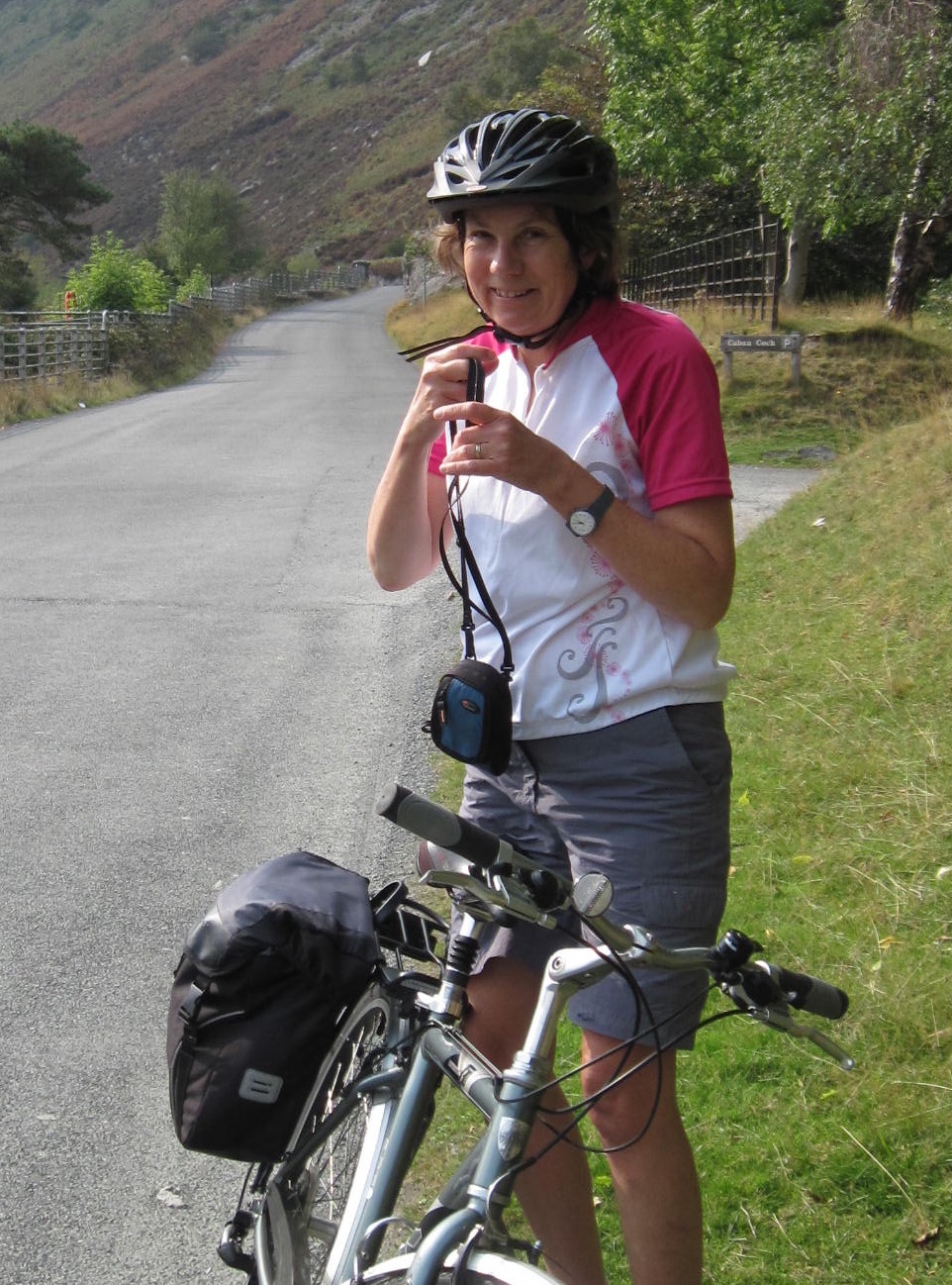 If a cycle tour sounds like your thing or perhaps you’re looking to get out on your bike for a leisurely ride. Kay recommends a few things. If you haven’t been on your bike for a while, naturally it’s best to start small and make sure your bike is in good order and fit for a ride.

A mechanical top tip is to use pre-filled inner slime tubes in case of punctures from the thorns in the hedges.  It automatically seals your tire as you ride along. You can buy it from Halfords or Pearce Cycles in Ludlow.

As for routes, try to do a recommended or do a guided tour.  In Ludlow, there are options to suit varied levels such as Tweed Cycle riders (tweed optional but part of the fun).  There are lots of off-road routes if you want to start easy such as the Oakley Estate just outside Ludlow town centre.

Whatever your choice its best to at the very least just get on your bike and plan a break for tea and cake.